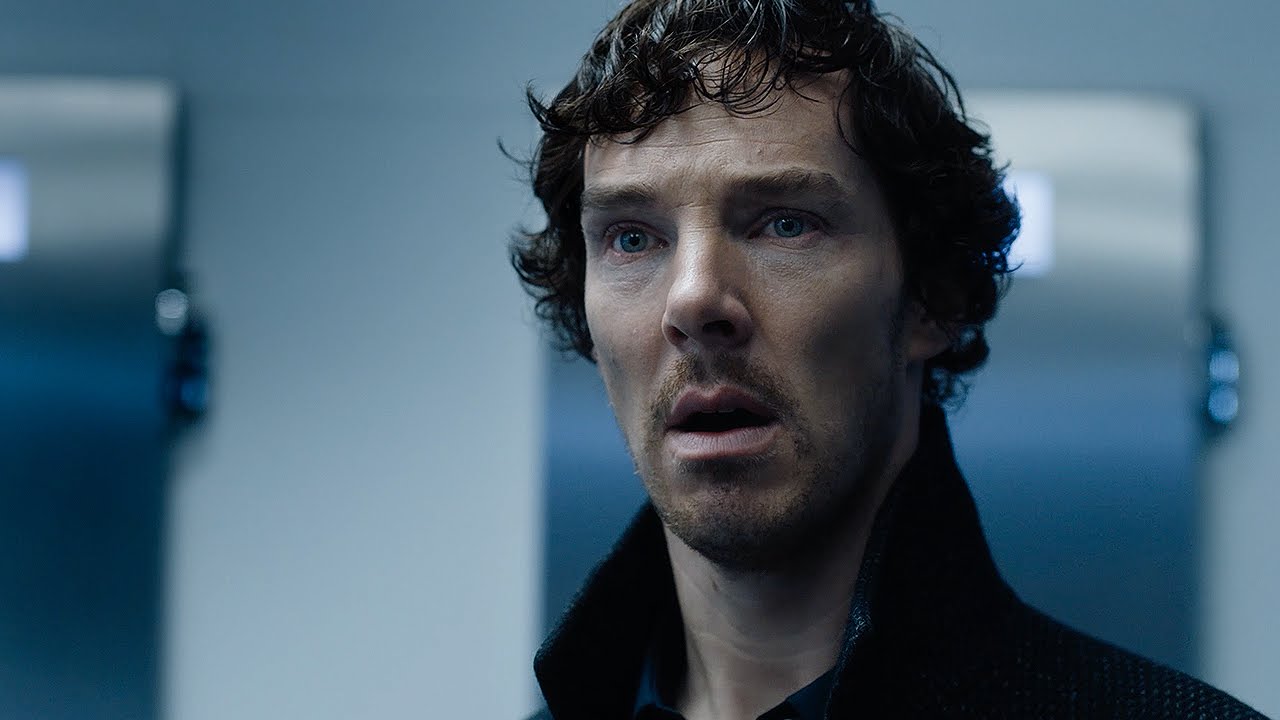 If the name Geek Girl Riot didn’t clue you in, we here at GGR just love getting our geek on. And that means we have the 411 on all the shows, books, games, and everything in between you must absolutely watch/read/play/etc right this minute. And that’s why we’re bringing in The Samantha Reports for Geek Girl Riot on idobi Radio, because, being the all-knowing geek queens we are, we have endless depths of geeky knowledge to impart to you, dear listeners. In the first instalment of this new segment, Geek Girl Riot’s Sam Devotta will introduce you to the BBC show, Sherlock. While the world Arthur Conan Doyle created isn’t exactly unheard of, this is a fresh take and is a must-watch in our books. So hit play and get caught up on everything you need to know in a report so on point it’d give Sherlock himself a run for his money.

Ready to watch? Good—and good luck—and let us know what you think on Twitter! Below you’ll find an exciting first look at season 4, which will air next year, as well as a transcript of The Sherlock Report.

Hey guys, I’m Sam and I’m a writer here at idobi. Today I want to clue you in on the magic that is BBC’s Sherlock series. I’m sure you’ve heard of it at some point, but since the trailer for the much anticipated fourth season was recently released, now seemed a good a time as any to tell you why you need to be watching it. Don’t worry if you don’t have time right now to catch up on the previous episodes – the next season isn’t going to come out until 2017!

Let’s set the stage: it’s contemporary London and Benedict Cumberbatch stars at the city’s only consulting detective. In the first episode, he’s joined by former military doctor John Watson, played to perfection by Martin Freeman. If you’ve never seen these two interact, you might want to look it up; the bromance between Sherlock and Watson is one of the best parts of the show…and that’s saying something.

Over the course of nine episodes – three per season – Sherlock and Watson work together to solve a series of cases that are loosely based on Sir Arthur Conan Doyle’s original stories. It’s fascinating to see how the show has been updated to appeal to a modern audience while still keeping the mystery going. Obviously a lot has changed in the 130 years since the first Holmes novel was published, so while there are lots of allusions and references to the original stories, the plot of each episode is completely reimagined. But more on that in a minute.

As I mentioned, the stars of the show are Benedict Cumberbatch and Martin Freeman aka Sherlock and Watson. They have such chemistry, it’s easy to believe in their friendship. Sherlock tends to be cold, detached, and not above manipulation to get what he wants, while Watson is his foil – a little more emotional with a moral compass and a big heart. The supporting characters are equally complicated: a lot of Conan Doyle’s original characters make updated appearances like Sherlock’s snobby older brother Mycroft as a government official; Irene Adler, the only woman to ever ruffle the great detective, is a dominatrix; and Mary Morstan, Watson’s eventual wife is…well, I don’t want to spoil it, but there’s a certain Mary-centric scene in season three that shot her to the top of my badass fictional ladies list. There are also some TV show-only characters like the sweet Molly Hooper, a pathologist at St Bart’s hospital who’s hopeless crush on Sherlock results in the detective taking advantage of her helpful nature.

But my favourite character is Sherlock’s archenemy, the brilliant but twisted Jim Moriarty. I have to confess here: much as I love Benedict Cumberbatch and Martin Freeman – both as their respective characters and as actors – I’m absolutely obsessed with Andrew Scott whose lilting Irish accent adds a touch of whimsy to his psychotic character. He’s completely unpredictable which is what makes him so fascinating to Sherlock.

The first two seasons are built around Sherlock’s relationship with Moriarty. While we don’t actually meet the “consulting criminal” until the end of season one, his name is mentioned a few times as being connected with the other cases Sherlock is working on. If Sherlock and Watson’s  bromance is one of the best parts of the show, then Sherlock and Moriarty’s dangerous mind games are a close second. Their final showdown in the season two finale, “The Reichenbach Fall”, is one of the best ninety minutes I’ve ever witnessed. Typically, Sherlock and Moriarty engage in a battle of wits in the original  stories and other adaptations; here, it’s no different, except for Moriarty’s flirtatious attitude, which gives his obsession with the great detective a vaguely homosexual air. There’s a scene in the season three premiere that proves that I’m not the only one who lives for Sherlock and Moriarty’s banter.

It’s hard to concisely describe the episodes: at 90 minutes each, they’re packed to the brim with details, so they really do need to be seen to be believed. You know how in the Harry Potter series, J.K. Rowling brings back details from previous books and explains their significance later on in Harry’s life? That’s how it is with Sherlock – every breath, every word, and every move is so deliberate, there’s rarely a superfluous moment –  everything has a purpose.

It would take me ages to describe all nine episodes, not to mention the Christmas special, for you, and I’d probably still miss an important clue or twelve so instead, let me tell you about some of the biggest moments of the series, broken down by season.

In season one, we have the initial meeting between Sherlock and Watson. They move into the iconic 221B Baker Street apartment and are almost immediately called out to help the police with a confusing case: a string of suicides across the city that are apparently linked. At first, Watson isn’t sure what to make of this unemotional man, but he quickly becomes attached to him, impressed by Sherlock’s brilliance and ability to read people within seconds of meeting them. Sherlock, for his part, seems to accept his new sidekick…in later episodes, he even refers to Watson as being his “friend” despite previously being uninterested in having friends. Watson starts blogging about Sherlock’s cases, much to the detective’s chagrin, but soon people from all over are coming to them for help. The season culminates in a stressful 90 minutes where Sherlock is handed a trio of cases and a timeline to solve them before innocent people are killed. He discovers that the mastermind behind these cases is none other than Moriarty, which leads to their first confrontation.

Season two picks up right where season one ends: Watson is strapped to a bomb, while Moriarty threatens to kill them both. Spoiler alert: they make it out alive because Moriarty receives a phone call that changes his mind. A new addition to this season is Irene Adler, the one woman who manages to catch Sherlock’s attention. He refuses to admit any sort of attraction to her, but seems to enjoy verbally sparring with her, and even saves her life at the end of the episode, despite the fact that she betrays him and seems to be working for Moriarty. Another highlight of the season is a reimagining of the classic Holmes story, the Hounds of the Baskervilles, where the massive dog in question turns out to be a hallucination. Despite being something of a celebrity, Sherlock soon finds his reputation at stake when Moriarty, working with a journalist, spreads condemning rumours. Once again, the season ends with a confrontation between Sherlock and Moriarty – except this time, Moriarty chooses to shoot himself in the head, as a final challenge to Sherlock who then fakes his own death.

Fast forward a couple of years, and Watson, having finally come to terms with Sherlock’s apparent death, is getting ready to propose to his long time girlfriend Mary. Of course, that’s the exact moment that Sherlock makes a reappearance, and if you’re looking for the funniest thing in the world, it’s Benedict Cumberbatch dressed as a French waiter attempting to get his friend’s attention without blowing his cover. A lot of season three deals with Watson and Mary’s relationship and how Sherlock comes to terms with his friend having a fiancee, but he does concede to being the best man at their wedding. Of course, Mary isn’t quite who she seems to be, and it takes blackmail and a billionaire for the truth to come out. I know I’ve already spoiled quite a bit for you, but I think the season three finale is something you really need to see for yourself. Let’s just say that, just as Sherlock is about to be exiled from England, Moriarty’s face appears on every screen across the country – whether or not he’s alive remains to be seen.

The season four trailer just came out, and I can’t even tell you how many times I’ve watched it…and I’m still left with so many questions. What does Mycroft say – or do – to his brother that causes Mrs. Hudson to ban him from her house? Did Mary and John have their baby? Why does Sherlock, normally so detached, look like an emotional wreck? And, most importantly, was that the back of Moriarty’s unblemished head a minute and seven seconds into the trailer?? I need to know!

While it’s impossible to predict what creators Steven Moffat and Mark Gatiss have in store for the detective, here’s what I think we’ll witness in the next season: Sherlock will probably suffer some sort of psychotic break. He spends the majority of the Christmas special, the Abominable Bride, in a drug-induced coma, searching his mind palace for an explanation of Moriarty’s apparent return and I think Sherlock is too much of an addict to have completely quit his recreational drug use. How much of the next season will be reality and how much will be a result of Sherlock’s drug addled brain? I’m also worried something is going to happen to either Watson or Mary, which would explain Sherlock’s emotional state, but I don’t really see them killing off Watson…not until the season finale, at least. It’s possible that Mary will be a victim – in the original stories, Watson was married a couple of times, so it would be cannon to kill her off.  There’s also a new bad guy on the scene – clues from the comic con panel suggest that this is Culverton Smith but who or what he does remains a mystery. I’m willing to bet he works for Moriarty in some form, and is maybe out to avenge his former master’s death? Or maybe he’s a completely new entity, someone that Sherlock has no ties with! Either way, I’m intrigued and I have faith that the show will at least give me a case of the feels if nothing else.

Because of the length of the episodes – and the caliber of the actors – the series feels more like a bunch of mini movies rather than a standard tv show. The acting is superb, the writing is excellent, and the cinematography is beautiful – Sherlock has something for everyone. So make sure you set aside a day later this year to indulge in the first three seasons – it should only take you fifteen hours to completely catch up – and then join me in the wait for the next season. The game is on!