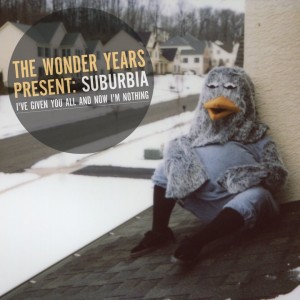 With the release of their new album Suburbia, I’ve Given You All And Now I’m Nothing via Hopeless Records upon us, The Wonder Years have taken a more creative way on conventional promo contests. We will let Soupy explain…

“We’re tired of the same contest over and over again. I’m not interested in anyone emailing us a picture of them with The Wonder Years written on their hand or some shit to win an iPod that I don’t think actually exists in most contests. Instead, we wanted to get creative with it. Hopefully, at this point, if you’re reading this, you’re familiar with Hank. Hank is a pigeon and he hangs out with us. Think of him as a tangible projection of how we’ve always felt about our band, life of the pigeon. He is on the cover of our new record Suburbia I’ve Given You All And Now I’m Nothing.

We’re sending Hank on a quick US tour. He’s going to appear in ten cities for a few hours at a time. If you follow him on twitter (@HankthePigeon) you will get the scoop on where he’s going to be and when.

Property of Zack is going to be hosting the blog where you’ll get updates from Hank on the road as well as photos, clues, etc.   Hank will be twittering clues about his exact location during the time where you need to go and find him. When Hank comes to your town, you’ve got to track him down and say what’s up. You snap a few photos with him and you’re on your merry way with some cool prizes. The prizes are as follows:

1. The first 4 people to find Hank in each city will receive a copy of the Don’t Let Me Cave In 7â€³ on orange and clear swirl vinyl. This color is limited to 100 copies and you can ONLY get it by finding Hank. It’s never been for sale and it won’t be until someone needs to pay their rent and flips it on eBay.

2. Everyone that finds Hank will receive and exclusive signed TWY poster featuring scans of the Polaroids we used for the album artwork. Mitch Wojcik took the photos and he’s staggeringly handsome. Trust me.

3. Everyone that finds Hank will be entered to win two guest spots to your date of Warped Tour this year.

That’s the long and short of it. We wanted to do something different that got you out of your computer chair and involved. I hope you have fun with it and when you see Hank, tell him I said what’s up.”- Soupy