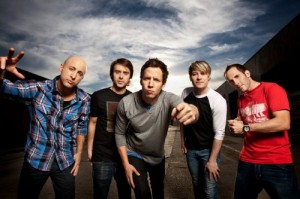 Simple Plan’s touring plans for the next few months will take them across the continent. Forever The Sickest Kids, The Cab, and Marianas Trench will join them for the trek through the US, then after taking some time off for Christmas they’ll head out across Canada with All Time Low, Marianas Trench, and These Kids Wear Crowns. Dates for both tours can be found below.

w/ Forever The Sickest Kids, The Cab, and Marianas Trench