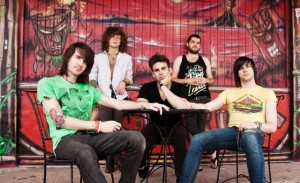 Mayday Parade will release their self-titled third album October 4th. The band returned to working with producers Zack Odom and Kenneth Mount, who also co-produced their debut album A Lesson In Romantics. The band will head out on tour this summer with All Time Low in support of the new album. The track listing can be found below.