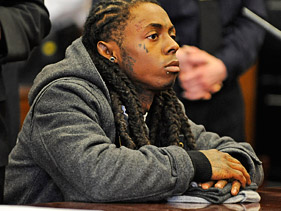 NEW YORK – Lil Wayne turned himself in to authorities on March 8, after multiple sentencing delays for a July 2007 gun-possession charge.

A near riot broke out in front of the Manhattan Criminal Court Building when the superstar MC entered, escorted by police and his Cash Money crew. Photographers aggressively angled to capture the last images of the rapper before he was formally sentenced to one year in prison.

Dressed in black jeans, a black shirt and a gray jacket, Lil Wayne made his way in, before Judge Charles H. Solomon sentenced the rapper. The New Orleans native sat next to his lawyer, Stacey Richman, without addressing the court.

After Solomon reminded Wayne of his charges, the rapper firmly nodded that he understood. Police then handcuffed Lil Wayne and he stood up to be taken away.

He paused momentarily before leaving and nodded to Cash Money execs Birdman and Slim, who were present in the courtroom. Just like that, Wayne was gone.

The rapper reached a deal with prosecutors in November to plead out to a lesser deal, and in return, he is expected to be released from prison as early as October. In 2007, Lil Wayne was arrested for attempted gun possession following his first headlining performance in Manhattan at the Beacon Theatre.

New York is among the toughest states in the country when it comes to gun-possession laws. In other states, Lil Wayne could have gotten off with a misdemeanor rap and probation. However, in New York, only law-enforcement officials and those affiliated with authorities are permitted to carry firearms.