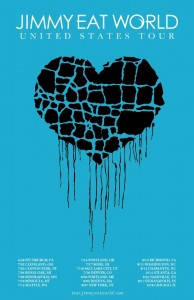 Jimmy Eat World will be touring across the US this summer in support of their highly-anticipated eighth album Damage. The album comes out June 11th and you can pre-order it now via the band’s webstore. Click the poster to see it full-sized and check out the dates below!