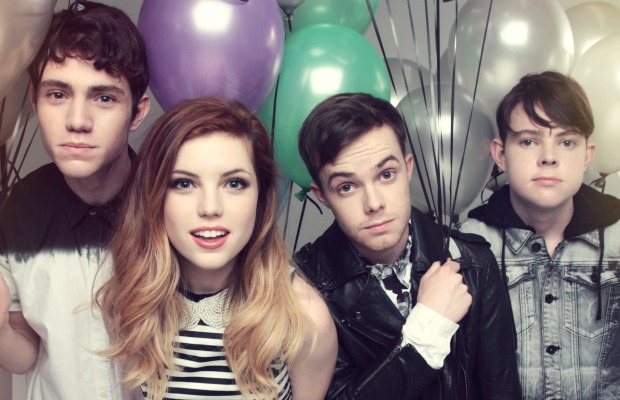 After gaining a lot of buzz on Warped Tour this summer, Echosmith just wrapped up a national tour opening up for Tonight Alive. idobi writer Catherine Yi caught up with lead vocalist Sydney Sierota at the band’s hometown tour date in LA to reflect on coming up young, signing with a major label, meeting new fans, and more.

You guys were signed to Warner Bros Records last year. It’s pretty incredible to be signed so early on. How has that whole process been for you guys?

It’s been insane. Warner is such a cool record company because one, they don’t feel like a record company. They feel like friends and they feel like really cool people to work with and people that we would probably choose to work with anyway. They also know when to give input and when not to. They know to let an artist breathe, which is really important. Sometimes people just forget that artists need their space and time to be creative and all that stuff, so Warner’s really good at that and developing artists. They’re really mindful of that, which is important, and it’s been a pleasure to work with them. Not everyone gets to say that about their label but I think everyone with Warner gets to say that so it’s awesome.

That’s really cool, and I know you guys changed your band name around that time too. How’d you guys decide on Echosmith?

We went through hundreds of names, literally. For a week, we just went through them. If we were driving somewhere and we saw a cool word that was fun to say or looked cool, we would write it down. We had this huge board of words and we would pair things together. Anyway, we got the idea of a blacksmith and how they shape metals, and we got the idea of shaping sounds, which is what a band does. And there’s nothing else called Echosmith, except a girl, but I think it’s fine. We actually asked for her Instagram name. We messaged her on Twitter – we were like, “Hey, can we have it? We’ll send you free t-shirts!” and now she’s a huge fan, so it worked. Because at first she was like “I’m not the band!” for everything she kept getting tagged in. It’s pretty funny actually. But anyway, we decided on that and it sounded cool. Wen you name your band, you’re not like, “I hate Death Cab for Cutie because their name makes no sense,” you know what I mean? So we just decided to go for it, and then nobody really thought of it after that. But I like it now. There’s really no other option anyway [laughs]. Better like it.

So you guys were on Warped Tour for the first time this summer. How was it going on a tour like that? I know it’s always kind of seen as a test if bands can really make it.

[laughs] That’s what everyone says. Yeah, Warped was cool because we’re so different from every band on there pretty much. And we didn’t know in the beginning if it was gonna be a great thing or a terrible thing. So we just decided we’re gonna be ourselves. People will like it if they like it. Anyways, it ended up working out really great and people were really into it. We had fans that had Metallica shirts on, but also The Ready Set shirts or Never Shout Never – people from all spectrums, so that was really cool. And it was a good tour because it shows that hard work pays off. We kinda just had to decide in the beginning and get over the fact that probably most of these people, 99% of them, don’t know who we are. So we went out every single day and walked the lines and walked just around the park saying, “Hey I’m Sydney, I’m in a band called Echosmith. Come see us at this time if you want.” And sometimes people would literally say no or I’d say, “Do you want a free CD?” and they’re like, “Nope” and I’m like, “Can’t get everyone!” [laughs] At first I was so offended! And then you get used to it, like now I feel I can go up to anybody in the world – I don’t care who it is – and tell them to listen to our band. It was a great tour for growing as a person too, and as a band, so it’s a really cool experience and if anyone has the opportunity, I say go for it. Because I know a lot of people are scared of it, but it is really cool.

Like what you were saying about being different from any other band on the tour, you guys sit somewhere between alternative and pop music. What’s it like being in that position? Do you see it working to your advantage?

Yeah, I think it can be cool, and it seems to be cool already even just seeing when they’re not really pushing for radio yet except college, just seeing it naturally already getting played on random stations – some that are alternative, some that are pop, and just seeing it happen on its own, which is really cool. It gives us more options anyway. We can go for the alternative scene first and if it doesn’t work, go to mainstream. Who cares, you know? And if you get mainstream, you usually get everyone else so that’s fine. I mean, who cares how someone finds you. Genres are genres, but good music is good music. So if someone likes it, then cool. If not, oh well.

How is it being on the road so often at this age? Do you find it hard balancing school while pursuing a career in a band?

It’s been good. I mean, a lot of people are like, “Oh, are you sure?” even with us touring right now. It’s going really great, or it seems like it is, and some people still – like, some people I went to high school with are like, “Are you really sure you should be doing this and not going to college?” and I’m like “Yeah! I’m sure!” [laughs] I decided a long time ago. It’s interesting of course that there are people who are gonna question it, but I mean yeah, I don’t have a backup plan. Oops! You know, I’ll figure it out if it doesn’t work. But it’s been great and it’s fun doing it at this age because college will always be there, always. College doesn’t leave – you can go at 80, you know. I know not a lot of people do that, but it is possible, so I’m just going for it now and I’m happy with how it’s happening. It’s looking like I don’t have to go to college in the end, which is kinda cool for what I wanna do.

You guys are all siblings. What’s it like being with each other literally all the time, traveling everywhere you go together?

Yeah, as any band would, we fight sometimes of course. But I mean, we’ve been working together for so long that we do know how to work with each other, which has been an advantage, and we do know what buttons to press and stuff. We kinda learned early on that it’s not really a good idea to try to annoy each other because you’re gonna get it back just as bad from that person. So yeah, it works and we actually do like each other and enjoy spending time together. When we’re home we still hang out, you know, so it really works and we all have a really good time together.

You guys are nearing the end of this tour opening for Tonight Alive. How has the tour been?

Amazing. It’s been really cool because Warped Tour was a lot about discovery for our band and we got a lot of cool fans from that tour. Of course there’s still discovery with every tour that you do, but this tour seems a lot like building on that fanbase that we already had from Warped Tour or the Owl City shows that we did. So it’s been really cool to just see fans come back and fans already know all our songs at these concerts. It’s just so crazy – it kinda blows my mind every night to be honest. I don’t think it’ll ever get old. I don’t think anyone can ever say that. It’s been really great and really fun to just see how much people are connecting with the music and having stories about our songs and their lives.

What’s been the best part about meeting all these fans?

I think just in general, the fact that fans for some reason feel more of a freedom to talk to a band member about what they’re going through even more than their parents or their friends, and I think it’s a really cool opportunity for all of us to talk to these people. I know I’ve had a lot of really cool experiences and conversations that I never ever would’ve been able to have if I wasn’t doing this, if I was just hanging at home every day. So I’ve been able to actually give advice on what kids are going through. There’s a lot of broken kids, you know, and everybody has their stuff – there’s different extents of course to every story, but it is very crazy to see how broken most of these kids are. Them actually opening up about it is really cool and the fact that they’re asking me for advice on how to be happy or go through this situation is just crazy. I’ve had a lot of really cool experiences that I’ll never forget – just conversations, just talking.

And your new album Talking Dreams just came out. How has that response been?

Great. It’s been awesome, I mean it blew our expectations away with the response and how many people are really into it and it seems like there’s a lot more love than hate for this album. We were honest with this album – I mean, we wrote just about our perspective on life and we were honest with how we felt about it. We were excited about life so we were gonna write about it. It doesn’t have to be all depressing to be honest [laughs]. Some people think that’s the case but I think, as any artist should, they should be honest with how they feel about what’s going on. So anyway, that’s what we try to do and it was like if you love it, awesome, if you don’t, cool. So it works out.

Who would you say are some of your biggest influences that led to your sound?

We liked a lot of 80’s new wave growing up, so I mean Joy Division, The Smiths, Echo & the Bunnymen, or U2, but we also like The Killers and Coldplay and more modern bands. We kinda just drew from a lot of different things, but a lot of 80’s music was really cool to us and the fact that they were all about melodies was really awesome.

So with all this momentum you guys have gained, what do you have in store for next year?

Lots of touring. We can’t announce anything yet but things will be announced very soon. Basically lots of touring and whoever’s reading this, we’ll most likely be coming to where you are pretty soon in this next year, so I’m really excited to just keep promoting this album.