If you follow the entertainment business at all, you’re probably well aware of “Hollywood accounting,” whereby very, very, very few entertainment products are technically “profitable,” even as they earn studios millions of dollars. A couple months ago, the Planet Money folks did a great episode explaining how this works in very simple terms. The really, really, really simplified version is that Hollywood sets up a separate corporation for each movie with the intent that this corporation will take on losses. The studio then charges the “film corporation” a huge fee (which creates a large part of the “expense” that leads to the loss). The end result is that the studio still rakes in the cash, but for accounting purposes the film is a money “loser” — which matters quite a bit for anyone who is supposed to get a cut of any profits.

For example, a bunch of you sent in the example of how Harry Potter and the Order of the Phoenix, under “Hollywood accounting,” ended up with a $167 million “loss,” despite taking in $938 million in revenue. This isn’t new or surprising, but it’s getting attention because the income statement for the movie was leaked online, showing just how Warner Bros. pulled off the accounting trick: 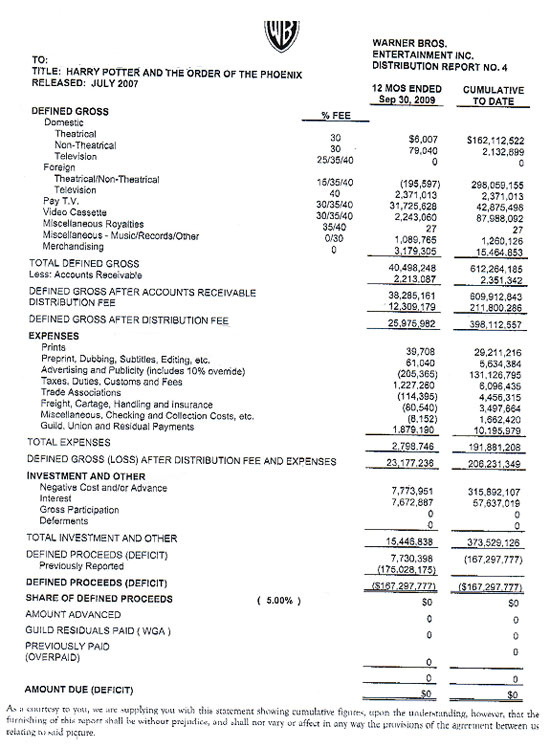 Now, that’s all fascinating from a general business perspective, but now it appears that Hollywood Accounting is coming under attack in the courtroom… and losing. Not surprisingly, your average juror is having trouble coming to grips with the idea that a movie or television show can bring in hundreds of millions and still “lose” money. This week, the big case involved a TV show, rather than a movie, with the famed gameshow Who Wants To Be A Millionaire suddenly becoming “Who Wants To Hide Millions In Profits.” A jury found the whole “Hollywood Accounting” discussion preposterous and awarded Celador $270 million in damages from Disney, after the jury believed that Disney used these kinds of tricks to cook the books and avoid having to pay Celador over the gameshow, as per their agreement.

On the same day, actor Don Johnson won a similar lawsuit in a battle over profits from the TV show Nash Bridges, and a jury awarded him $23 million from the show’s producer. Once again, the jury was not at all impressed by Hollywood Accounting.

With these lawsuits exposing Hollywood’s sneakier accounting tricks, and finding them not very convincing, a number of Hollywood studios may face a glut of upcoming lawsuits over similar deals on properties that “lost” money while making millions. It’s why many of the studios are pretty worried about the rulings. Of course, these recent rulings will be appealed, and a jury ruling might not really mean much in the long run. Still, for now, it’s a fun glimpse into yet another way that Hollywood lies with numbers to avoid paying people what they owe (while at the same sanctimoniously insisting in the press and to politicians that they’re all about getting content creators paid what they’re due).