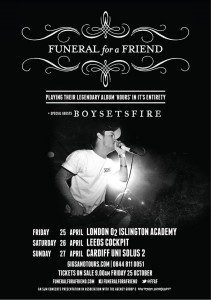 Funeral for a Friend have revealed a short run of dates in the UK where they’ll be playing  Hours  in full. BoySetsFire will be opening the tour with more support acts to be announced. Tickets go on sale Friday the 25th at 9am!