Due to Travis Barker’s emergency tonsillectomy, Blink-182 has been forced to cancel all of their May 2012 tour dates, according to the band’s statement 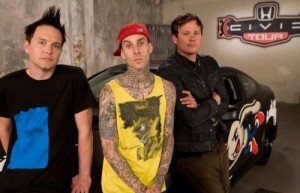 on their web site.   This includes the band’s appearance at the Bamboozle Festival; they will be replaced by My Chemical Romance on that date.

The following dates have been canceled and will not be rescheduled:
May 15 at Blue Cross Arena in Rochester, NY
May 17 at the Verizon Wireless Arena in Manchester, NH
May 18 at Mohegan Sun in Uncasville, CT
May 19 at The Bamboozle in Asbury Park, NJ
May 20 at Sands Bethlehem Event Center in Bethlehem
May 22 at Colisee Pepsi Arena in Quebec City, Canada.

The May 10 and 11 concerts at the Winstar Casino in Thackerville, OK have been rescheduled for September 13 and 14, 2012. All previously issued tickets will be honored on the new dates respectively.   Refunds are available at point of purchase.

We wish Travis a speedy recovery and look forward to seeing Blink-182 back on the road as soon as he’s well again.